@ ALL LOCATIONS IN
Armenia 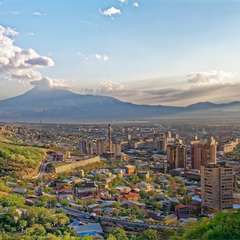 The former Soviet republic of Armenia (AM) is located in the Caucasus region between Asia and Europe, landlocked between Turkey, Iran, Georgia, and Azerbaijan. The generally mountainous region features a number of microclimates ranging from arid highlands to dense forests. Aside from the dramatic scenery, many visitors are drawn to Armenia for its collection of Christian monasteries, some of which pre-date the fall of the Roman Empire. Meanwhile, the largest lake in the Caucasus Mountains, Lake Sevan, covers more than five percent of Armenia’s surface area. Although the country is in the midst of modernization, its primary attractions are rooted in ancient architecture and traditional culture that’s been preserved for millennia.

Public transportation in Armenia is considered adequate in the capital city of Yerevan, but quite useless for reaching premier attractions. Thus, most visitors will need to rent a car in Armenia. Given the mountainous terrain and general condition of roads, Armenia presents a challenge for less experienced drivers. As the infrastructure continues to improve, getting around in an Armenia car hire will be less formidable. The network of roads around the capital are well-marked and up to Central European standards; however, most signage is Cyrillic, and English is not widely spoken anywhere in the country. For visitors with an adventurous spirit, Armenia offers a wide range of destinations with a relatively modest range.

Southern Armenia is much easier to navigate than the rural northern regions. Local driving habits are typically alarming to Western tourists, but not on par with the worst of the worst. Potholes are more of an issue than anything else, but again, as Armenia continues to upgrade its infrastructure, physical road hazards will be encountered with less frequency.

Tips and advice for renting a car in Armenia

As of this writing (and the foreseeable future) the borders with Azerbaijan and Turkey are not open to foreign tourists. Your Armenia car rental vendor may allow travel into Georgia, but surcharges and extra insurance will be involved.

Credit cards are not widely accepted outside of Yerevan. Surprisingly, Euros and American dollars are welcome throughout the country, in addition to the Armenian dram.

Relations with Turkey and Azerbaijan remain a sensitive topic and visitors are advised to avoid mentioning either country in conversation.

Yerevan is the primary gateway for travelers to Armenia, and the only place you’ll find car hire providers.

All-wheel drive vehicles are highly recommended for driving outside of the capital region. Meanwhile, driving at night is risky, at best. Most roads in Armenia are poorly lit and animal activity tends to pick up after sundown.

Female travelers should be advised that Armenians are not used to seeing women unaccompanied by a male chaperone, and thus, may encounter some unwanted attention when traveling alone or in pairs.

Frequently asked questions about renting a car in Armenia

1. What is the best time of year to book a rental car in Armenia?

2. Is it possible for one way rentals in Armenia?

3. Should I rent a round trip or one-way rental in Armenia?

4. Which location should I rent my car from in Armenia?

5. Do I pay more fees and taxes for renting a car at the airport in Armenia?

6. What insurance do I require for driving a rental car in Armenia?

7. What is the best way to save money on rental car insurance in Armenia?

8. Should I prepay my rental car booking in Armenia?

9. What are the largest numbers of vehicle seats available for a rental car in Armenia?

10. What types of sports and special cars are available in Armenia?

11. Can I take my rental car across borders in Armenia?

12. How do I inform the rental company I will be crossing a border from the Armenia?