@ALL LOCATIONS IN BAHAMAS 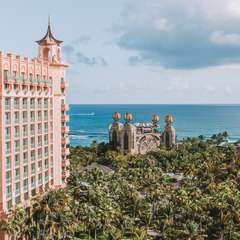 The Bahamas (BS) consists of roughly 2,000 islands in the Atlantic Ocean, although commonly (and mistakenly) thought to lie in the Caribbean Sea. As a former British colony, the country has flourished from tourism and international finance. The archipelago can be simply divided into northern and southern island groups, both of which were formed on top of coral reefs that contribute to its renowned “pink” beaches and clear blue turquoise waters. Its climate ranges from subtropical in the northern islands, to consistently tropical in the southern group.

The Bahamas are one of the premier locations in the world for boating, wildlife tours, and aquatic activities, as well as cruise ship entry and exit ports. Its substantial roster of music festivals is also a tremendous draw for international travelers.

The two main gateways to the Bahamas are the capital of Nassau on New Providence, and Freeport on Grand Bahama Isle.

For the sheer convenience of getting around at your own pace, visitors are encouraged to rent a car in the Bahamas. Travelers from the U.K. will be particularly delighted to find familiar driving conditions, as the road network is based on the British model. Each island is defined by its own geography, but New Providence has the most developed infrastructure, while others such as Great Abaco have one route that stretches from end to end.

Generally speaking, it’s exceptionally difficult to get “lost” in the Bahamas, but the flat terrain offers little in the way of landmark orientation. Meanwhile, roundabouts control most intersections where space allows, and traffic congestion is only a problem in central Nassau, where local drivers tend to exhibit aggressive behaviors. Road conditions across the archipelago are not in great shape, with potholes and faded lane markings among the top complaints from visiting drivers.

Tips and advice for renting a car in Bahamas

Bahama car rentals from major brands are mostly available from the international airports, with a handful of agencies scattered across the archipelago. Keep in mind that you’ll save money by picking-up and dropping-off the vehicle from the same location.

Car hires in the Bahamas are distinguished from regular private vehicles with an “SD” prefix (for self-drive) on the license plate, which makes them a potential target for thieves. Make sure you have good travel insurance.

Traffic flows on the left in the Bahamas, but many car rentals are left-hand drive, which further complicates your driving experience.

Road signage is notably lacking outside of Nassau and Freeport.

Are you driving a rental car in Bahamas?