@ALL LOCATIONS IN BOLIVIA 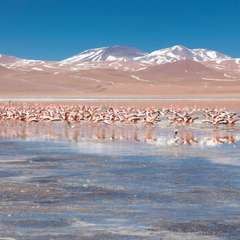 The somewhat overlooked and gorgeously landlocked country of Bolivia (BO) is bordered by Brazil, Peru, Chile, Argentina, and Paraguay, and home to some of the most remote and inaccessible locations on Earth.

Commonly called the “Tibet of South America”, Bolivia is generally defined by its three main topographical features: the Atacama Desert in the south and east, the vein of Andes Mountains that splits the center, and its gateway to the Amazon Basin rainforest, found in the north and east.

Due to its variable terrain, Bolivia is also defined by a drastically variable climate from one zone to another. At an altitude of 4,058 m (13,313 ft) above sea level, the city of La Paz is the highest capital in the world. The majority of Bolivia’s tourism is split between cultural and natural exploration, with Lake Titicaca — the world’s highest lake — being the highlight of its most popular destinations.

Bolivia’s public transportation system is slow, unreliable (due to frequent strikes), and not well maintained. Thus, travelers who rent a car will have a much better time of getting around the country. That said, the overwhelming majority of Bolivia’s transport network is unpaved, single-track road, with routes between La Paz and the cities of Santa Cruz, La Paz, Cochabamba and Sucre linked by a proper highway system.

Visitors who stick to the developed south and east sections of the country will find some of the typical (and modest) challenges endemic to South America — poor surface conditions, sometimes reckless drivers, confusing signage — but otherwise, it’s pretty rough going in Bolivia, and exclusively for experienced drivers.

Mountain driving is especially hazardous, with narrow roads that hug sheer cliffs that drop into bottomless ravines. One small miscalculation and you’re in very big trouble. Meanwhile, the mountain passes are trafficked mainly by supply trucks and rickety buses, leaving little or no room for passage.

Cheap car rentals in Bolivia are provided by the most reliable and trusted names in car hire: Alamo, Avis, Budget, Dollar, Enterprise, and Hertz — to name a few. Choose from minicars, compact sedans, fullsize 4-door sedans, premium and luxury vehicles, estate wagons, and 7-12 seater minivans. But for the safest and most satisfying experience, rent an SUV.

Tips and advice for renting a car in Bolivia

Driving in the mountains is just about as dangerous as things get. In addition to the hazards outlined above, the direction of traffic often switches lanes in order to give left-hand drivers a better look at the passageway.

Service stations are non-existent in the southern half of the country, which is hardly even mapped by roads to begin with. Petrol is mainly found in the cities and around the tourist attractions at Lake Titicaca.

Common sense is your best friend in Bolivia. It’s a generally “safe” country as far as violent crime is concerned, but nobody is your friend here. Watch out for plain-clothes “cops” asking to see your passport. Generally speaking, travelers are advised to travel with only a copy of the passport and the Bolivian visa stamp. Theft and robbery are the main types of crimes against tourists.

Carrying large amounts of cash is a really bad idea, especially in remote areas. And it should be obvious, but don’t drive at night.

Rent an SUV for driving outside of developed areas. Maybe just rent an SUV no matter what you’re doing in Bolivia, just to be safe.

Car rentals in Bolivia are almost certain to have some pre-existing damage. Do a thorough inspection of the vehicle before driving away from the rental agency. And remember, the Collision/Loss Damage Waiver does not cover damage to tires and wheels, which are the most commonly damaged articles.

Are you driving a rental car in Bolivia?