@ ALL LOCATIONS IN
Egypt 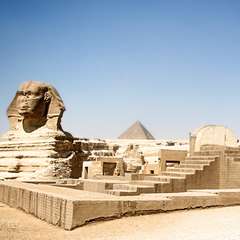 Home to one of the world’s oldest civilizations, Egypt (EG) is country in North Africa that needs little or no introduction. As one of the world’s most popular tourist destinations, famed for its pyramids, temples, hieroglyphs, medieval heritage of churches, monasteries and mosques — and let’s not omit: mummies — Egypt is one of the most fascinating places on Earth, and at the top of every traveler’s list of must-see destinations.

Unfortunately, civil unrest has put a sizable dent in the country’s tourism industry, but visitors continue to flock to the Sinai Peninsula and the origin of the mighty Nile River. Perhaps one bonus of the travel downturn in Egypt is lower prices and fewer crowds, which tended to create logjams at the most popular sites. Even the most inexperienced traveler should be familiar with the Egyptian climate and terrain, and most people know exactly what to expect when visiting.

The most convenient and cost-effective way to pack as many sights into a trip is to rent a car in Egypt. The road network is comprehensive, albeit a bit bumpy in some spots, and all the top destinations are accessible by private vehicle.

The eastern half of the country from Luxor to Aswan and Abu Simbel is considerably easier to navigate than the empty western section, but anywhere near the Nile River is plagued by congestion. Meanwhile, local drivers tend toward the Middle Eastern side of the spectrum (read: reckless, unlawful, somewhat dangerous), and fuel stations are few and far between outside of Cairo and other major cities.

The hot and dry conditions require extreme caution for traveling long distances, and road signs could be more numerous, if they ever get around to it. And finally, the majority of major attractions have ample parking; however, it may take a bit of convincing to let you park there — but nothing that can’t be done.

Tips and advice for renting a car in Egypt

Fridays are the best days for driving in Egypt, since most locals are busy with prayers.

Holders of the International Student Identification Card (ISIC), (and the teacher equivalent) are eligible for up to 50 percent off entrance fees to major attractions and other discounts found elsewhere. It wouldn’t hurt to apply for an ISIC in your home country prior to arrival. (Sadly, the discounts don’t apply to car hires in Egypt.)

English is widely spoken in the cities of Cairo and Alexandria, and all the major tourist destinations. Otherwise, the road signage — what little exists — is in Arabic, with an occasional English phase here and there.

Cash is king in Egypt, although most major hotels and restaurants accept credit cards and since technology will catch up, this will become even more prevalent. Your Egypt car hire provider will most certainly want you to use plastic instead of paper. However, the country is plagued by a shortage of small bills. It’s recommended that you request the smallest denominations available from the currency exchange.

Fewer tourists unfortunately means more aggressive hawkers and touts all throughout the country. Be on guard and ready to say “No thanks” to unwanted attention.

Be exceedingly mindful of scams just about everywhere you go in Egypt. The most common vendor-related scam is for the proprietor to claim you gave them a 20 LE note instead of the 50 LE note you most certainly handed over. If confronted with this scam, just play it off as an honest mistake and offer to let the tourist police sort it out.

Are you driving a rental car in Egypt?

Frequently asked questions about renting a car in Egypt

1. What is the best time of year to book a rental car in Egypt?

2. Is it possible for one way rentals in Egypt?

3. Should I rent a round trip or one-way rental in Egypt?

4. Which location should I rent my car from in Egypt?

5. Do I pay more fees and taxes for renting a car at the airport in Egypt?

6. What insurance do I require for driving a rental car in Egypt?

7. What is the best way to save money on rental car insurance in Egypt?

8. Should I prepay my rental car booking in Egypt?

9. What are the largest numbers of vehicle seats available for a rental car in Egypt?

10. What types of sports and special cars are available in Egypt?

11. Can I take my rental car across borders in Egypt?

12. How do I inform the rental company I will be crossing a border from the Egypt?