@ALL LOCATIONS IN PORTUGAL 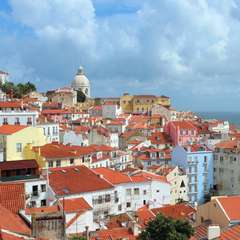 Situated on the Iberian coast of the Atlantic Ocean, and carved out of the western half of Spain, Portugal (PT) enjoys a temperate climate, varied topography, and a dynamic culture found in vibrant cities and scenic countryside. Part of what makes Portugal unique among European countries is its geographical isolation courtesy of the Serra de Estrella mountain range. Due in part to its north-south orientation along the coast, Portugal boasts a diversity of landscape concentrated in one compact location. Lush and rocky mountains in the north, desert wasteland in the south, rolling forests in the center, and gorgeous beaches on the coast — all of which can be accessed in a half-day’s drive from the thriving city of Lisbon. Combined with the welcoming Portugeuse people, it’s no surprise that Portugal is considered one of the world’s top value destinations for leisure and business alike.

Rail and bus travel in Portugal are both slow and costly. If you want to make the most of your trip, you will want to rent a car. Fortunately, Portugal car rental rates are exceptionally reasonable by European standards. Driving in Portugal is generally straightforward, with a modern network of roads to the majority of imaginable attractions. Portuguese drivers don’t have the best reputation for civilized traffic behavior, but the same could be said about half the cities in Europe, and two-thirds of the continental U.S., never mind Asia. Of course, there will be traffic jams in Porto and Lisbon. Of course, you’ll see reckless behavior from time to time. But most importantly, you car hire gives you the opportunity to see so much more of this beautiful country than you would via public transportation. And rest assured that the Portuguese government is doing what they can to promote a more visitor-friendly atmosphere on the roads.

Getting a cheap car rental in Portugal is easy when you rent a car from from Sixt, National, Enterprise, Thrifty, Dollar, or Budget. The best deals can be found in the compact and economy class of cars, but you’ll still find great rates on fullsize luxury and premium sedans, 7-12 seater minvans, SUVs, estate wagons, and convertibles.

Tips and advice for renting a car in Portugal

The majority of Portugal’s expressways are toll roads. Rates are pretty reasonable and you can either pay in cash, with a toll transponder (Via Verde), or a vignette sticker. Have a chat with your car hire vendor if you plan to put a lot of miles on the vehicle.

Secondary roads and rural routes are in various states of repair. All-wheel drive vehicles tend to fare better in the remote areas.

Be advised that when entering towns and villages from major highways, you’ll pass a speed camera that will indicate whether you’re under the 50 km/h limit. This is more of a scare tactic than anything else. The idea is to simply get the idea into your head that you’re not on the highway anymore.

Lane markings on Portugeuse roads are not as common as those most countries, and you’re likely to be driving on any number of unmarked two-lane highways.

Road signs in Portugal, particularly exit signs, have a vaguely amusing tendency to be located immediately after the exit you just passed.

Unlike most developed nations, you can secure and pay for your Portugal car rental in cash.

Are you driving a rental car in Portugal?

Here's some more in depth Portugal driving rules and guidelines for car renters:

Portugal is not known for its great roads and clear traffic signs. In fact, it has some of the highest numbers for accidents in Europe. Drivers are known to be a bit reckless. Therefore, if you’re planning a road trip to Portugal, you should familiarize yourself with the rules of the road to keep you safe.

Take the time to gather all the documents before you leave your home country. You’ll need the following:

You must be 17 to drive in Portugal and generally, at least 23 to rent a car. If you’ve had your license for less than a year, you must get a yellow sticker with the number “90” on it. You can get from the ACP motoring club. Basically, this sticker means you can’t go above 90 km/h (56 mph). Children under 12 must sit in the backseat, as well as be in a child safety seat or booster seat.

The Portuguese police will use radar traps and unmarked cars to enforce the speed limits. Pay attention to road signs, where speed limits will be posted in kilometers per hour. It is illegal to use a radar detector. Follow the limits below, otherwise:

The legal Blood Alcohol Content (BAC) for driving is 0.05 g/100ml, which is basically the equivalent of one drink in an hour. If caught driving, you could face the following punishments:

Keep these regulations in mind as you drive in Portugal, and you will be on your way to safer driving.

Not only does it have a rich and varied history (and there is much to see from a cultural aspect), Portugal also has stunning natural beauty, incredible beaches, plenty of sunshine, is affordable and offers mouth-watering cuisine.

Due to an extensive and well-maintained road network, Portugal also lends itself to exploration by rental car with numerous magnificent locations just waiting to be discovered. We have identified a few places that you should add to your Portuguese itinerary.

Lisbon, the capital of Portugal is probably where your journey will start. Lisbon retains much of its old world charm, including the incredible Baixa district which houses some of the traditional shops and businesses from a bygone era. Many of these are still operated by the same families that have run them for hundreds of years. Lisbon has a number of other historical attractions including the Jeronimos Monastery (built in the 15th century), Belem Tower (a UNESCO World Heritage Site) and St George’s Castle. The historical town of Sintra is also just 25 kilometres from the Lisbon city centre.

The city is blessed with some of the sunniest beaches in Europe, many of them found a mere 10 minute drive outside Lisbon. Finally, don’t miss out on experiencing Fado, the national music of Portugal. Fado performances can be found right throughout Lisbon in the evenings, and most of Portugal for that matter.

Similar to Spain’s Costa del Sol, but not as commercial and retaining its natural charm, the Algarve region is one of Portugal’s most visited attractions. This coastal area takes in a little over 150 kilometres along Portugal’s Atlantic coastline. Not only is it an area of stunning natural beauty, it is filled with amazing beaches, resorts, small fishing villages and other wonders just waiting to be discovered.

Some of the more popular locations in the Algarve include Faro and Albufeira. In these towns you will not only find the traditional Portuguese way of life, but also many tourist activities as well, including incredible nightlife and restaurants.

Often overlooked in favour of Lisbon and the Algarve region, the capital of Portugal is situated in the north of the country. Famous for its fortified wine (of which there will be plenty to sample), Porto is situated on the mouth of the Douro River. Its old city centre, which is a UNESCO World Heritage site has many historical attractions and magnificent ancient buildings. The picturesque Cais da Ribeira sits on the river and is a popular tourist attraction filled with bars, cafes and restaurants serving traditional Portuguese cuisine. Other attractions in Porto include the ancient cathedral Se do Porto (built during medieval times,) and the pure gold interior of the São Francisco Church

Cheaperthancars and Cheaperthanhotels are the leaders in providing cheap rental car options as well as budget accommodation, saving you money and helping you to really enjoy your vacation.